How impoverished our knowledge of the Viking world would be today if it were not for the great literary treasures of Iceland. By contrast, little survives from other countries of that time period. Almost all of what we know of Norse mythology, Viking navigation, law codes, everyday life, etc. is preserved in the Eddas, sagas, and poetry of Iceland.

It may seem strange that a remote island, just south of the Arctic Circle, should be the repository of such literary riches. Yet the country’s very isolation, in great part, contributed to the profusion of its poetry and prose.

Being far from their native soils, Icelanders were keenly interested in their past, traditions, and in their rugged forbearers who first colonized the land. They preserved their ancestors’ memories and the stories of old in verse, sharing the tales during the long winter nights.
For nearly six months of the year, icebergs prevented anyone from leaving the island.

Winter brought deep snows and near constant darkness. With so many hours spent indoors, plus the necessity to offer hospitality to guests, entertainment became an important part of the Icelanders’ lives — especially in the form of storytelling. 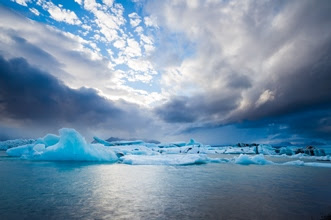 Theirs was an oral tradition. The old tales and legends were recited in skaldic verse which utilized formal meters and highly-wrought, complex language.  This included “kennings” which employed clever and elaborate metaphors. In the 9th and 10th century, the skalds of Iceland achieved wide renown and were sought for the royal courts, particularly those of Norway and Denmark.

In the year 1000 the Althing voted to adopt Christianity as the state religion. King Olaf of Norway, who had, himself, embraced Christianity, threatened to cut off trade with Iceland if it did not likewise adopt the religion. Iceland’s survival depended upon trade with Norway, so a middle ground was sought. After deep consideration, the Law-speaker decided that Iceland would adopt Christianity publicly, but in their homes, people could worship as they wished. This compromise led to a peaceful transition. As Christianity was accepted, the populace continued to value and to preserve the stories of its pagan heritage.

Christianity brought with it the Latin system of writing, making it possible to record works of great length onto vellum. (The Vikings’ angular runic alphabet was used to carve inscriptions in wood, stone and metal. It was ill-suited for capturing long passages of verse and prose.)

The transition from oral recitation to writing did not happen immediately. However, when the Icelanders did begin to put quill and ink to parchment (11th – 12th c), they wrote in the vernacular (Old Norse) rather than in Latin. Remarkably, Íslensk has changed little from how it was spoken the 9th c. With some effort, the ancient Eddas and sagas can still be read by Icelandic school children today.

Iceland’s main body of literature was produced between 13th – 15th centuries and is extensive. Snorri Sturluson, an influential goði, poet and scholar writing in the 13th century, leaves us some of our most important sources of the Viking age, chief among them being the Poetic and Prose Eddas and the Heimskringla. In part, these works are a compilation of poems based on the oral tradition of the 9th – 11th centuries. They provide our greatest source of knowledge of Norse mythology, plus legends of heroic warriors, and instructions for skalds.

The Poetic (Elder) Edda recounts the Norse creation story and Ragnarök (Völupsá - Prophecy of the Seeress). It also contains Norse wisdom, rules of conduct, runes, and charms (Hávamál - Sayings of Hár); and details how the god, Heimdall, sired the three social classes of jarls, karls and thralls with detailed descriptions of each class (Lay of Ríg). The Prose (Younger) Edda further expands upon Norse myths and lore and includes what are essentially technical textbooks for skalds: the Skaldskaparmál and the Háttatal.

The Heimskringla is actually a collection of sagas of the Norwegian kings.  Snorri’s composition follows accounts of the historical rulers over several centuries. His “kings’ sagas” created a new literary form. Additionally, the work also portrays the war between the gods of the Æsir and Vanir.

Iceland is famous for its family sagas. These relate tales handed down over time, portraying Icelanders who became embroiled in deceptions and blood feuds. The sagas read like historical novels and part of their popularity lay in the depictions of human relationships and interactions. They also supply details of everyday life and those of navigation methods and of the laws which are quoted.

But can such details, given in what many consider fictional tales, be trusted for accuracy? There has been an ongoing dispute around this question with opinions changing overtime. Currently a new approach is being taken – paring the information given in the sagas with archaeological findings. Overall, it can be said that the early Icelandic audience, listening to the sagas (or reading them), knew the law and everyday aspects of their lives, and, in many cases, were descendants of the people portrayed in the sagas. Given that, it is also recognized that attributes and deeds of the characters could be inflated or fictionalized.

The Poetic Edda and Heimskringla are a collection of poems and prose sagas recorded in Iceland, mid 13th century, by Snorri Sturluson (1179-1241), one of the most powerful chieftains and learned men of his time.
ThePoetic Eddic, trans. Lee M. Hollander
v Völupsá (Prophecy of the Seeress) Norse cosmogony and Ragnarök
v Hávamál (Sayings of Hár) Norse wisdom, rules of conduct, runes, charms
v Lay of Ríg:  Tale of how the god, Heimdall, sired the three social classes (jarls, karls & thralls) with detailed descriptions of each class embedded in the tale.
Heimskringla, trans. Lee M. Hollander (History of the Kings of Norway)
v Ynglingatal (Enumeration of the Yngling Kings):  Contains genealogy of the Ynglings, plus additional information on the war between the Æsir and Vanir.
Edda, trans. Anthony Faulkes
v Gylfaginning (The Deluding/Duping of Gylfi):  Contains amplification of Norse mythology. [“Northern mythology and cosmogony” LH
v Skaldskaparmál (the Language of SkaldshipPoetry): Intended as a textbook for skalds; contains more myths, lists of kennings (compressed metaphors)
v Háttatal “The Enumeration of hætir (meters)” and “technical aspects of skaldic art”
The Viking Site - Jesse Byock, Prof. UCLA, http://www.viking.ucla.edu/index.html

Visit his website for a full listing of his books, articles and information on the Mosfell Archaeological Project in Iceland

Not to be missed is his fascinating article on a fornaldarsögur, described as the “’poor cousins’ within the family of Old Icelandic literature … often fantastic narrations that read very differently from the more sober and worldly islendingasögur [family sagas].”

Posted by Kathleen Kirkwood at 12:17 PM