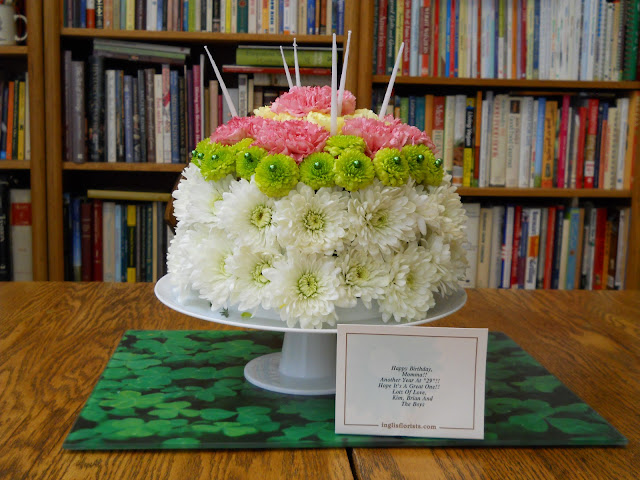 “Twenty-nine” again and what to my wondering eyes should appear at my door but a gorgeous, “fat-free” floral birthday cake from daughter, Kim, son-in-law, Brian, and the grands – Sean, Beau, Connor and Nicholas.

More well-wishes, cards and flowers poured in from hubby, sons Chris and Scott, daughter-in-law, Ligia, and grandson, Aidyn – some of them even sang. Dear friend, Anne, treated Mr. KK and I to breakfast at Tucson’s fabulous Tohono Chul Park. Afternoon treats included yummy chocolate petit fours from Mom and Dad.

Thank you one and all. You truly take the cake!
Posted by Kathleen Kirkwood at 2:37 PM 15 comments:

LEGEND OF THE BLUE DOG 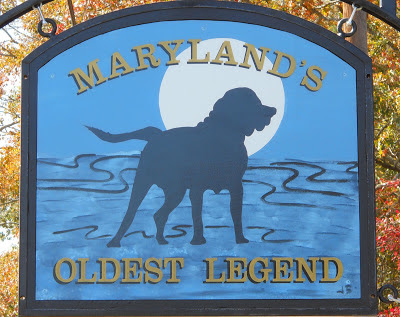 Friends, I have been away and do apologize for letting the blog so sorely lapse. Since October, I’ve been on travel, attended a spiritual retreat and, subsequently, my first Science Fiction/Fantasy conference, TusCon,  where I participated on various panels, including a reading and talk on “time-slips,” tossed in for good measure. (More in blogs to come.)

My trip east took me back to my roots in historic Port Tobacco, Maryland, which also happens to be the setting, in part, for my forthcoming novel, PIRATES’ MOON (2013). Port Tobacco was once the seat of government for Charles County (founded in 1658). It became a ghost town when the court house was burned under suspicious circumstances (1892), and the county seat was moved (1895).

When I grew up, only a few of the original 18th century houses remained, the others having been long since dismantled and removed, and tobacco planted in the vacant fields. My own girlhood home was a replica of the original building that once stood on the town square proper, looking out on a remnant of the old courthouse (now rebuilt), Chimney House (c 1750) and Stagg Hall (c 1740), which has remained in the family since my great-grandparents’ day.

With the county’s long history you’ll understand when I say I was raised on more than a few ghost stories. None was more memorable than the “Legend of the Blue Dog” — a legend forever associated with the beautiful Rose Hill Mansion that sits on a hill, overlooking the Port Tobacco valley. (More on the legend to come.) 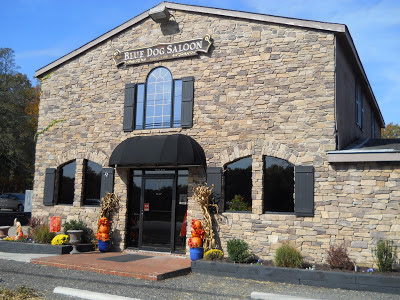 During my recent visit to Port Tobacco, my parents surprised me with an outing to the “Blue Dog Saloon” nearby. I was captivated from the moment I gazed on the Saloon’s warm stone exterior and signage, the theme clearly resonating through me. Inside, on entering the dining room, I was astonished to discover an enormous and quite wonderful painting, depicting the Legend of the Blue Dog. I fell instantly in love. 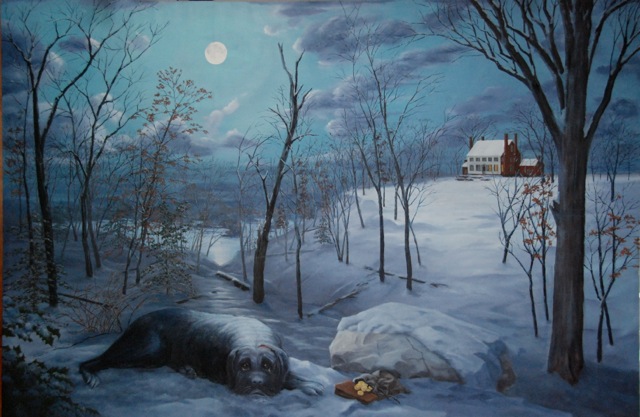 Returning the following day to capture pictures of the Saloon’s exterior and interior — and most especially the painting — I met the owners, Gary and Heidi Fick, and learned that prints and a canvas version of the painting would soon be offered for purchase in order to raise money for a charitable cause — that of bringing running water to the poor of Nanjemoy in the county’s western district, who have none in their homes.

Gary and Heidi also placed me in contact with Don Zimmer, artist extraordinaire and Port Tobacco resident, who created this marvelous work of art. It has been a great privilege and pleasure to speak with him and to learn more of his projects and art. 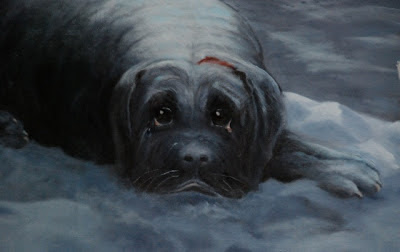 I’m delighted to report that the prints and a canvas version of Don’s painting are now available for purchase. To learn about the “Legend of the Blue Dog,” the artist (Don Zimmer), the Nanjemoy Neighbors Water Project, and how to order your own print, go to www.bluedoglegend.com.

If you are in the area and would like to stop by the Blue Dog Saloon for a delicious meal, entertainment, and to view the original art piece visit www.thebluedogsaloon.com.