The Valiant Heart sample is here!

Hi, this is Mr. KK again. I just wanted to post a quick note to let you know that the sample of our newly revised edition of THE VALIANT HEART is available for free download on Kathleen's website. It contains the prologue and the first three chapters. The full book will be available for sale in the next couple of weeks. Here's the link to download the sample in PDF, Kindle and ePub formats:

Sampler #1 is also available for free download via the same page. It contains the first four chapters of A SLIP IN TIME, SHADES OF THE PAST and HIS FAIR LADY.
Posted by Kathleen Kirkwood at 1:41 PM No comments:

Hi - Mr KK here with an update on the Kathleen Kirkwood Sampler Edition. I've just finished uploading the new version, now titled Kathleen Kirkwood Sampler #1 to all of the major vendors. Unfortunately, I could not rename it on Lulu (which is the feed for the free version on Barnes and Noble), so I unpublished it. I did put it back up on Barnes and Noble but the lowest price I can post it for is 99 cents. It's available for free on our website, www.KathleenKirkwoodHistoricals.com (in PDF, Kindle and ePub formats) and on Google Play, Goodreads and Kobobooks (in ePub format). It's also available for 99 cents on Amazon for direct Kindle download and Barnes and Noble for direct Nook download. The Kathleen Kirkwood Historicals website has the links.

Kathleen Kirkwood Sampler #2 will contain the first portions of the HEART series, which we'll start releasing in May. Our plan is to release one per month, so The Valiant Heart will be released in May, The Defiant Heart in June and The Captive Heart in July. The Gallant Heart (Rannulf's and Etainn's story) is planned for a 2014 release.
Posted by Kathleen Kirkwood at 3:14 PM No comments: 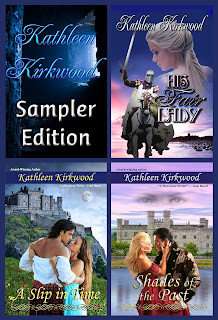 Due to the re-prioritization of the HEART series, Pirates' Moon, which was originally planned for release at the end of 2012, has been rescheduled for a late 2013 release.
Posted by Kathleen Kirkwood at 6:18 PM No comments: