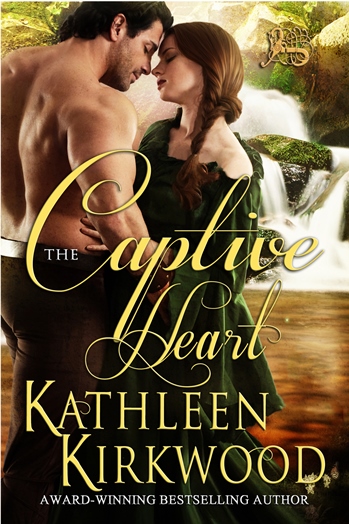 Congratulations to the nine US and one Canadian winners of THE CAPTIVE HEART Goodreads giveaway!

We shipped out trade paperback copies to the US winners today via USPS Priority Mail. We’re drop-shipping the Canadian copy directly from Createspace. You should have your books soon.

ENJOY and THANKS so much for your interest and support! Your positive feedback is always appreciated.
Posted by Kathleen Kirkwood at 12:22 PM No comments:

The HEART Trilogy is here! 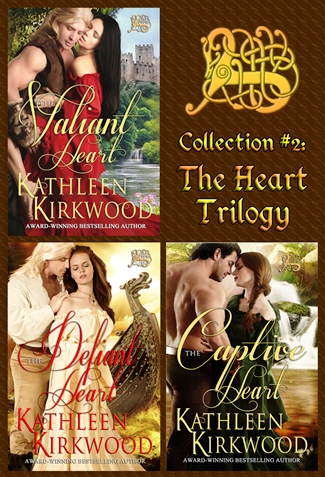 I'm pleased to announce the release of Kathleen Kirkwood Collection #2: The HEART Trilogy in e-book formats.

This collection includes the full text of all three HEART series books. It's available from Amazon, Barnes and Noble, Kobobooks and Smashwords. My website Purchase Links page has links to purchase this collection from all of the major vendors.

The individual HEART books will continue to be available at their special promotional prices through August.

Enjoy!
Posted by Kathleen Kirkwood at 8:36 AM No comments:

Adventures in Iceland (cont’d): Memories of a Navy Wife 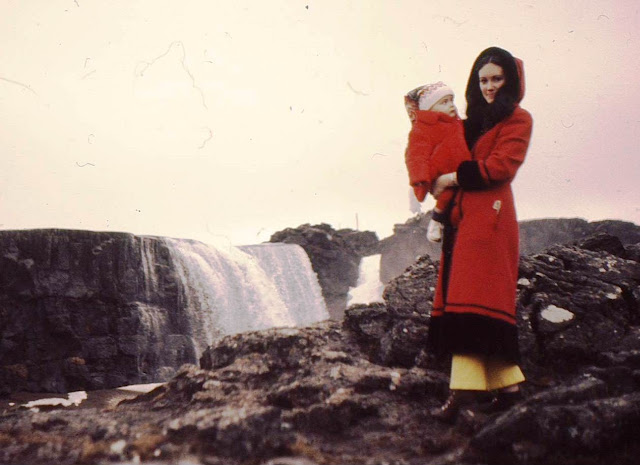 As I mentioned several blogs back, when my husband was assigned to the Naval Air Station in Keflavík, Iceland, it was not only the beginning of a great adventure for our little family, but it sparked my interest in the Viking Age. This ultimately led to my penning the HEART trilogy.
In future blogs, I’ll write more on the Viking connections and inspirations from our days in this fascinating land — a glimpse “behind the scenes” of some of the things that went into the creation of those books. Before diverting in that direction, however, I’d like to share a few more fun reminiscences of my life as a Navy wife in Iceland during the years 1972 to 1974, and some photos that we’ve retrieved from our archives. 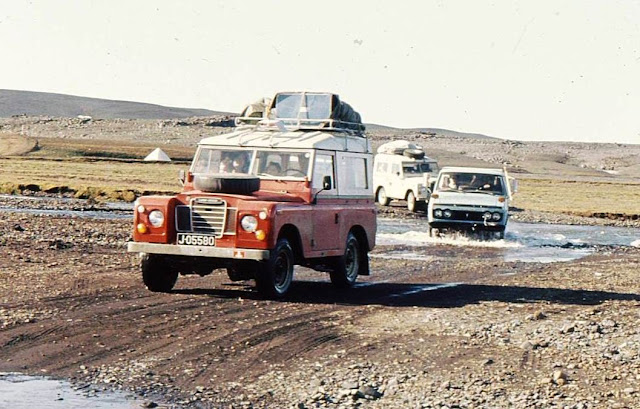 
Upon arriving in the country, there were a few things to quickly come up to speed on (no pun intended):
Driving: Iceland had recently converted from driving on the left side of the road(British style) to the right side of the road (American style). On the face of it, that was great for Americans – no adjustments needed on our part. On the other hand, we were advised that in the event of a mishap, an Icelander’s instincts might still be to swerve in the direction he’d formerly employed to avoid accidents (while driving on the left side of the road) – in other words, opposite to the direction now needed. Thus, they would swerve toward, rather than away from us!

Then there were the traffic circles we encountered in Reykjavík. Did I mention I hate traffic circles? According to Icelandic law, the person on the inside of the traffic circle has right of way because (as the story goes), once two young swains were rivals for the same girl’s hand. The one man trapped the other man in the rotary as they drove round and round for hours, not letting him out! Hence the law was changed. So now, we had to watch out for the guy on the inside of the traffic circle who might want out, remembering that the Icelanders were driving in the opposite direction they were used to and that their instincts might be to swerve in the wrong direction – in other words, straight into us! Did I mention I hate traffic circles?
Drinking and Driving: Laws are extremely strict in Iceland. Consumption of three Icelandic pilsners would put you just below the limit. However, consumption of only one American beer or a single glass of wine put you over the limit. Designated drivers were a must! 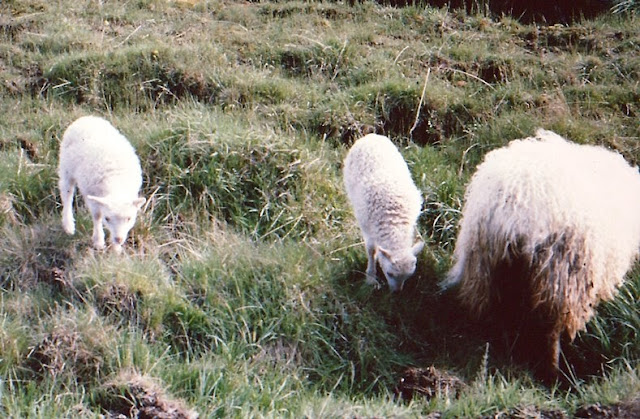 Sheep and Driving: Don’t hit! These animals roam freely and are protected. They are extremely important for their wool, milk, meat and other by products (rugs, coats, etc.) If a sheep is hit and killed, a large fine is levied. If memory serves, when a female (ewe) is killed, the offender must pay for the value of at least three generations of sheep and the goods they would have produced in their lifetime. Bottom line – give the sheep the right of way and let the critters pass!
Um … did I mention that roasted leg of Icelandic lamb (mutton really) is delicious? I was instructed to use just a bit of garlic salt to season the meat and the results were amazing. The taste was not at all strong or “lamby” as here in the States. 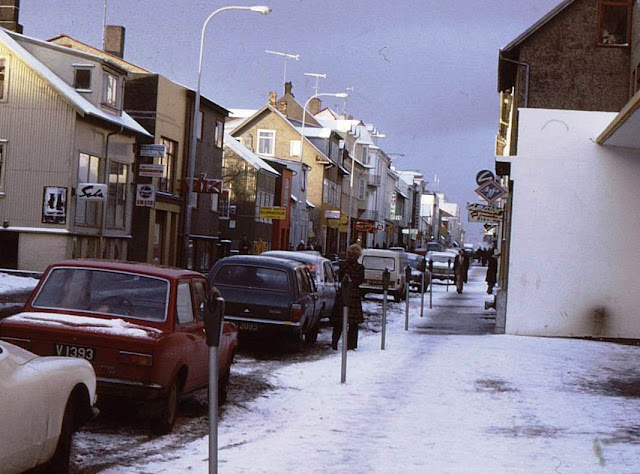 Shopping: We lived off base during our first year and it was delightful in so many ways. Our apartment at Túngata 13 was just off the main street which was lined with individual shops. There were no department stores or “Five-and-Dimes” as we knew them. Bread and baked goods were found in the bakery (the cardamom pastries were heavenly). Meats, milk, cheeses, and other food items including such things as blood pudding, were found at the small grocers’. Here I hunted down the different forms of milk (mjólk) I needed for the family: undanrenna (skim milk, recommended for the baby – it came in pouches at the time) and nýmjólk (closest to what we are used to in the States). For a fascinating breakdown on the varieties check out this article: Got Mjólk?
http://www.grapevine.is/Features/ReadArticle/Iceland-Got-Milk


Hardware could be found in its own interesting little shop, and a little further down the street, fabric could be purchased by the meter. This puzzled the American wives at first who arrived armed with their dress patterns. Were we getting more, or less fabric by the meter than by the yard? Happily, we received three extra inches by the meter – no need to adjust those patterns! 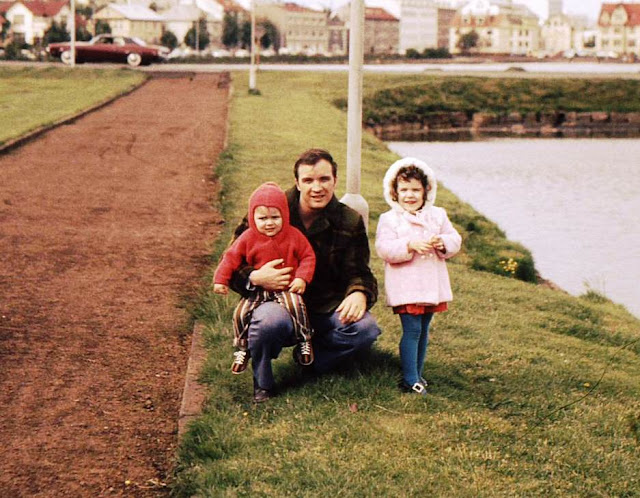 Mr. KK with the little ones in Reykjavík
There was wonderful shopping to be had in the capital city of Reykjavík and factory tours were offered that were well worth taking advantage of for the discounts and a fun day’s outing. These included the wool factory (yarn for knitting Icelandic sweaters, rugs), cheese factory (wonderful creamy white cheeses – I preferred the one with lobster in it and Mr. KK liked the caraway), pewter items including jewelry and drinking vessels, volcanic ceramics and more.

The Icelandic population is nearly 100% literate. Hence, bookstores abound with many titles in English as it is readily spoken in Reykjavík, Keflavík, Akureyri, and other population centers.

Our favorite restaurant in Reykjavík was the Naust. Memories of the finest fish dishes still linger. While pulling together this blog, I discovered that, happily, the Naust is still in business. Should you be passing through be sure to stop by the restaurant on Vesturgata. 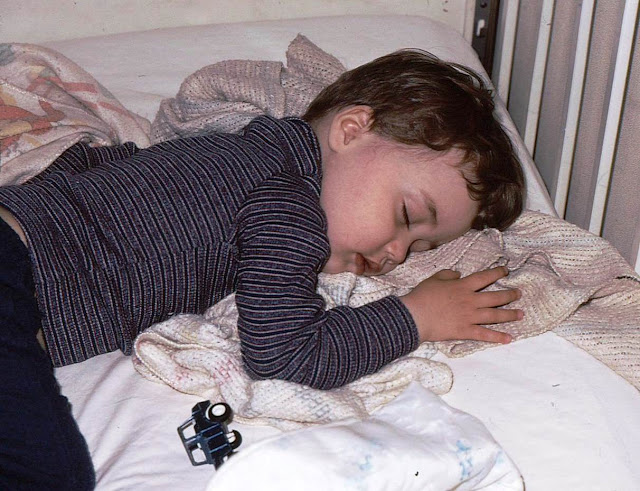 Sleeping: As mentioned in my previous post, Iceland’s year is divided between six months of darkness and six months of daylight. I arrived in summer when the sun still burned brightly at midnight. One of the first things I learned was the Navy wives’ trick to put foil over the bedroom windows so the children would sleep at night. Happily, it worked!

During the winter months, darkness reigns and snow falls with regularity. It’s a time to tuck in, sip some warm tea (or in my case, hot coffee) and enjoy a good book. OR, assuming weather conditions are favorable, the opportunity should not be missed to bundle up, head out and take in the magnificent view of the Northern Lights as they dance in the sky.